Rich and I were in the Northern Michigan woods on another adventure.  On this trip we were hunting red squirrels.  We did our usual 5 hour drive and were greeted with perfect weather; 49 degrees, calm, and sunny.  As we entered the woods Rich quickly drew his handgun on a squirrel.  He was about to squeeze the trigger when I said, “Wait, he’s only 2-and-a-half!”  Rich holstered his sidearm and we kept searching.  In all we passed up 17 squirrels that afternoon because we didn’t find any that were at least 4 ½ years old…quality squirrels…trophies…we shot none.

Of course this didn’t really happen and we would shoot any squirrel that we find when squirrel hunting.  I’m simply trying to put into perspective the trophy hunting mindset and how it simply isn’t a good fit for most hunters.  Can you imagine not shooting a flying pheasant because its tail didn’t have enough bars?  How about passing on a running rabbit because its “lucky feet” were not large enough?  Why is it that antlered game animals invoke such a sense of longing, urgency, even jealousy?  I’ve shot some very large carp with my bow…true trophy carp…and nobody is trying to encroach on my spots.  Yet had those carp been whitetail deer everyone would want to know where I shot them.

I’ve been making an effort to shoot older deer the past several seasons and have only shot one buck per season for 4 years now.  I would like to shoot a big, scoreable buck but it’s rare for any buck to make it past 2 ½ in the areas I hunt.  If I pass a shot I know that there is a very good chance that someone else will shoot the deer that I just let walk…even if it is a doe.  Michigan has so many hunters that it is simply illogical to think that the average hunter can manage their land for trophy deer.  There are exceptions for those who own huge tracts of land…which most of us do not and never will.  As always, I try to relate to the average hunter not those of privilege.  The average hunter has pressure from all sides..north, south, east, west… and many of us have let a small buck walk and heard a shot immediately after on the next property.  That’s just the way it is in Michigan and it will not change.  Everyone deserves the chance at a successful hunt and everyone should have the choice of what deer they want to shoot.  I’ve been trying to shoot bucks that are 2 ½ or older since 2008.  I have only seen three 3 ½ year old bucks in my 27 years of bowhunting.  I was lucky enough to shoot one and he “wasn’t big enough” by QDMA standards?

I won’t get into what QDMA is, here’s a link:  http://www.qdma.com .  Like my “quality squirrels” above their goal is “quality deer”.  I have no issue with their goals.  Again, I believe every hunter should have a choice about what they want to shoot.  However, I do take issue with any group pressuring other hunters to go along with their viewpoints.  That is a slippery slope that takes rights away and takes outdoor recreational opportunities away from the average hunter.  The average hunter has very limited time and has to work twice as hard to even get a few days a year to hunt.  If that hunter wants to shoot a squirrel, a pheasant, or a deer, they should be able to have that opportunity.  My neighbor has a great piece of land; 40 acres of hilly, swampy, land that borders a field that is corn, sugar beets, or soybeans.  He hasn’t shot a deer in 6 years now.  He isn’t trophy hunting.  He is deer hunting and has not had an opportunity at a buck.  If he sees an antlered buck he should be able to shoot it.  He should not have to “score it” or “count points” before shooting.  He is deer hunting and should be able to shoot a deer if he wants to.

So what is a quality deer anyway?  I’ve shot some very quality deer in my life and have never shot a record book buck.  I’ve shot quality bucks and quality does.  To me the more important focus is a quality hunting experience.  I have been fortunate to have had so many great experiences hunting the Michigan woods.  Many of the deer that I have shot have been some of the best memories of my life.  Many times the way the hunt comes together is the most important factor to me having a quality hunting experience and has little to do with which deer I shoot.  The whole story is so much more important than “the shot” and “the deer.”  I have a few 2 ½ year old bucks around this year and I shot one just a few days ago.  It was amazing.  Period.  I love deer hunting and I love bowhunting.  This buck was one of the smaller 2 ½ year olds that I have seen but the opportunity was there and I made a good shot.  The reason I was hunting in the first place is because I took the day off work to help my friend Tom find a wounded buck from the night before.  It’s funny how things play out like that. (See the companion  video to this article below.)

So why did I shoot this buck when there are bigger bucks around?  Because I was deer hunting and it made for a quality hunting experience.  All the bucks around are 1 ½ or 2 ½ so what difference does it make?  I’ve waited until the very end of archery season to shoot a buck for the past 3 years and that gets stressful and isn’t as much fun.  Hunting is supposed to be fun.  I passed 26 shots on bucks last year and that got depressing.  Trying to hunt for a bigger buck that isn’t there is kind of silly.  I have been using several trail cameras for 6 years now and have only ever captured ONE photo of a 3 ½ year old buck…6 years ago. 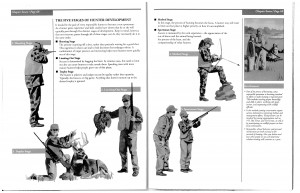 So where does the trophy hunting mindset come from?  Well, it’s 100% natural, acceptable, and believe it or not many people outgrow it.  The IHEA teaching aids such as the book “Today’s Hunter in Michigan” detail the 5 phases of hunter development.  Click the image for more detail.  The trophy phase is part of the natural progression through the hunting lifestyle.  It’s okay for hunters to want to manage their land and try to shoot big bucks.  It’s also okay for other hunters to shoot whatever legal deer they can and want to shoot.  We should keep that in perspective.  Television doesn’t help in this matter.  Many deer on T.V. aren’t real.  Game ranches do not offer realistic hunting situations and those are not pressured deer.  Those big bucks are amazing but they haven’t dodged arrows for the past 4 seasons and survived with 20+ hunters per square mile.

So what do I mean by quality hunting?  The term can mean different things to different people.  For those in pursuit of trophy whitetails quality hunting is the opportunity at big scoreable bucks.  For many new hunters it is an opportunity at a deer.  For experienced hunters it is perhaps the method used for taking a deer or simply the enjoyment of being outdoors hunting.  For meat hunters it is meat in the freezer.  I am a meat hunter and an experienced hunter.  I like the method idea and tonight I’m riding my mountain bike way back into some state land to try to shoot a deer.  I was lucky enough to draw an antlerless tag for Midland County and I am going to try to fill that tag with my bike and my bow.  I’ve been at this for 5 seasons now and have been focusing on a buck.  This year I’m focusing on a deer.  I passed several small bucks last year and the deer sign this year is very minimal.  If I shoot a doe that will be a quality hunting experience for me and a great memory.

Shouldn’t the memory be the most important thing?  I know some guys cheat to get big bucks.  In Michigan, I know many large trophy bucks are shot during the early antlerless season and even the youth season by adults.  I hear rifle shots at first and last light all archery season.  If someone cheats to shoot a big buck, how’s the memory that goes along with it?  I’d like to shoot a bigger buck and I tried going to Ohio a few years ago to make that happen.  I didn’t see any big bucks and I saw LOTS of hunters from Michigan.  I also had an interesting conversation with a local resident.  I told him I was from Michigan and came there hoping to shoot a big buck.  He said in a surprised manner, “Oh, you’re hunting bucks?”  I told him that with the number of hunters in Michigan most bucks didn’t get very old.  He said, “Well, I guess but we hunt does.  There are big bucks around but the does are better eating.  If we see a big buck we just wait for a doe.”  That was very eye opening to me.  I accepted his statement but admitted to him that I could not comprehend letting a big buck walk.  He then outlined a much different picture of trophy hunting:  “You know that green field back there?” he asked me.  I said, “The one at the bottom of the hill?”  “No, the next one back” he replied.  I shook my head yes.  He told me, “Last winter there were ten dead 8-points around that field.  The hunters shoot them and then measure the racks.  If the rack isn’t big enough they don’t tag it and leave it.”  I was simply shocked.  I realize that some hunters let ethics slide by the wayside but that was over-the-top for me.  What a great memory those ‘hunters’ had, huh?  I guess those weren’t quality deer.

I would love to have the opportunity to shoot older bucks…but I don’t so I make the most of what I have in the areas that I hunt.  My advice to you is to figure out a plan in order to have a quality hunting experience.  Is it hunting for a doe, for any buck, for a big buck, is it the method used?  My son Kaden could have shot his “first buck with a bow” last season.  There was chasing and grunting in the dark and when it got light enough the buck was within 12 yards.  His heart was pounding as the buck lifted its head…it was a little spike.  At his age I would have arrowed it but he chose to pass.  It wasn’t what he wanted to shoot and that’s okay.  We should always have a choice.  Get outside, shoot what you want to shoot, strive for a quality hunting experience, and good luck in the woods!

Update: Here’s a link I found today along the same topic of this article. I think it’s great.
You Have Permission: Shoot Small Bucks!