The recent debate about firearm ownership has spurred a lot of interest in the question, “Why does anyone need an AR-15?”  It’s a great question; one that has several answers and different answers from different owners.  As always, my views are based on my experiences. 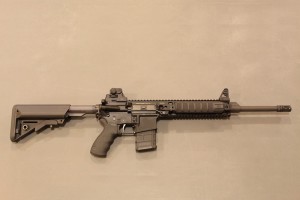 The AR-15 is a fine tool that has many uses.

This firearm season I was driving along one of my favorite 2-tracks through the Michigan woods when I saw blaze orange up ahead.  As I got closer, I noticed that this hunter was carrying an AR-15.  Since I have an appreciation for firearms I rolled down my window and struck up a friendly conversation.  I greeted this gentleman with a smile and asked what chambering his rifle was.  “Two-two-three” was his reply.  “Have you ever shot a deer with it” I asked.  “Not yet.  I know it’s a little small and I won’t shoot unless I have a good angle.  I’m shooting a heavy bullet so it should do the job.”  I agreed that the .223 Remington was a bit small for deer hunting, in fact in many states it is not legal for hunting deer because of the lack of bore diameter.  As our conversation continued, this well-spoken, 60ish-year old sportsman explained that he walks a lot.  He enjoys hunting large areas of Michigan state land and likes to walk and explore.  The light weight of the AR-15 combined with a forward-carry tactical sling made for a nice combination when covering several miles of ground.  It seemed like a really nice setup to me.

Fast forward 2 months and I now hear that AR-15s are not used for hunting.  That’s what my TV tells me anyway.  “AR-15s are extremely powerful weapons and have no place in the hand of civilians.”  I probably don’t need to explain the extreme power of the .223 Remington (5.56mm military version) to anyone reading this but I’ll touch on it a bit just in case.  The most popular hunting cartridge in the U.S. is the 30-06 Springfield so let’s compare that to the .223 Remington.  To keep it short I’ll choose one popular bullet weight for each cartridge from a common ammunition manufacturer.  I realize that 5.56mm is a higher pressure round than .223 and that various manufacturers have boosted the performance of many cartridges using modern propellant blends.  These are standard velocities that have been on the books for a very long time from affordable, off-the-shelf ammo.

So you can understand my confusion about the .223 when I hear about how powerful this round is.  Most hunters hold vastly more power in their typical hunting rifle than an AR-15 has with a standard chambering of .223 Remington.  Even the popular 30-30 Winchester that has somehow gotten a reputation for being a “diminutive cartridge that is marginal for deer” out-classes the powerful AR-15 with a muzzle energy figure of 1902 ft. lbs. not to mention bore diameter and bullet sectional density, but that’s a different topic for another time.  The simple point is that the .223 AR-15 isn’t that powerful by comparison.  While marginal for deer, many hunters are moving toward this platform for predator hunting as the .223 is a popular round for coyote and fox sized game.

Dianne Feinstein is planning to introduce a new assault weapon ban.  During a response to the NRA she said that she personally looked at pictures of guns in 1993 and in 2012.  Apparently there is an issue with them looking different?  Well Ms. Feinstein, technology does change.  What did your phone look like in 1993?  Your television?  Your computer?  Your vehicle?  Yes, things do look a lot different…that is, except the AR-15.  While it has undergone a few exterior cosmetic changes, it is still the same firing platform that was developed in 1957 and first deployed by U.S. military in 1963…yes 1963.  That’s not very modern for a modern sporting rifle.  This is around the time that color TV was becoming popular, American muscle was being built into some of the best cars ever imagined, multi-track recording was first being used on records…yes this was an innovative time that brought new technology such as Eugene Stoner’s ArmaLite AR-10 and subsequent AR-15.  New technology that is now all considered vintage.

So why does someone need to own an AR-15; a vintage firearm design?  I can think of lots of good reasons to own one but realistically, there is a difference between needs and wants.  What one needs is food, water, and shelter.  One does not need a phone, or a computer, or a motorized vehicle, or a television…think hard about that…these are wants and you have a right to own them.  You also have a right to own an AR-15.  When you have a right to own something, you can then choose whether to own that item or not.  If someone chooses to own an AR-15, they are not wrong.  If someone chooses to not own an AR-15, they also are not wrong.  There is a growing push to try to make people conform to a single viewpoint in this country.  It is okay to disagree with someone, it is not okay to try to take rights away from the person whom you disagree with.  It is my belief that conformity is a far more dangerous weapon than an AR-15.

There are many people who disagree with me about hunting.  Since I have been operating the “Real Hunting” YouTube channel, I have received several violent threats against both me and my kids…for hunting…doing a legal activity using legal methods.  These people have an idea about the way they want things to be in “their world.”  Since I am not conforming to their viewpoints, I am a threat and should be violently eliminated.  That seems like a good reason to own an AR-15.  Dianne Feinstein and friends have an idea about “their world” and unfortunately are in powerful enough positions to force people to conform.  That also seems like a good reason for owning an AR-15.  The Second Amendment applies to an individual right…that was upheld by the Supreme Court with a 5-4 vote.  A 5-4 vote seems like a good reason for owning an AR-15.  Article 17, Section 1 of the Michigan Constitution states:  “The militia shall be composed of all able bodied male citizens between the age of eighteen and forty-five years, except such as are exempted by the laws of the United States, or of this State; but all such citizens, of any religious denomination whatever, who, from scruples of conscience, may be averse to bearing arms, shall be excused therefrom, upon such conditions as shall be prescribed by law.”  It states that you are FREE to make a CHOICE!  If you are adverse from bearing arms…if you don’t like guns…it’s okay.  You may be excused.   I love freedom like this.  Of course this also states that I am of eligible age to be a member of the state militia so that also seems like a good reason for owning an AR-15.